Doubling Down on Danger — More Addicts Using Fentanyl and Meth

We know that drug use is harmful. When a person uses drugs, he or she opens the door to a long list of adverse side effects. It follows logically then that when someone uses multiple drugs at once, the risk is multiplied. Not only is the individual taking on the combined risk of multiple drugs and all their inherent side effects, but there is also the purely physiological effect of putting different types of drugs into the body at the same time. Such drugs can react with each other, causing further harm.

As drug use has spread across the United States and as the addiction epidemic has grown, this phenomenon of “poly-drug use” has become more common. New reports indicate that drug users in the West and Midwest are combining meth and fentanyl, often to the point of a lethal outcome.

Statistics Show an Increase in Fentanyl and Meth Use

Drug testing in places of employment, in some schools and other groups, as well as in law enforcement procedures does more than tell us if the person in front of us is using drugs or not. If drug testing information is collected and stored, we can use such information to determine drug use patterns across the country.

That’s what a group of researchers did, with an extensive series of urine drug tests for methamphetamine, cocaine, heroin, and fentanyl gathered over six years. Researchers Twillman, Dawson, and LaRue discovered much from their analysis. But the most important revelation was that statistics for both meth use and fentanyl use are on the rise, as are statistics for co-occurring meth and fentanyl use.

It's important to stress that any type of drug use is harmful. When people use drugs, there is always a chance for adverse consequences, even death. But when people use multiple drugs in tandem, their chances of experiencing an overdose or other harmful event increase exponentially. There is no type of drug use that is safe or “okay.”

“We are talking about serious and deadly risks – patients who may stop breathing and suffer heart attacks, strokes or develop bleeding in the brain. Methamphetamine abuse can result in anxiety, insomnia, addiction, mood disturbances, psychosis, and violent behavior. …”

Dr. Robert Glatter, who wasn’t part of the research project but who reviewed the findings, provided some valuable commentary on the discoveries. He noted the real danger that drug users take on when they mix fentanyl and meth: “We are talking about serious and deadly risks – patients who may stop breathing and suffer heart attacks, strokes or develop bleeding in the brain. Methamphetamine abuse can result in anxiety, insomnia, addiction, mood disturbances, psychosis, and violent behavior. … Fentanyl is 50 to 100 times more potent than morphine, and consequently may lead to respiratory depression and death.”

Researchers from the University of Washington/UW Medicine came across an additional discovery that makes this predicament of co-occurring meth and opiate use even more dangerous. As it turns out, addicts who use meth on top of an opiate are more than twice as likely to drop out of addiction treatment than individuals who are “just” hooked on opiates.

Dr. Judith Tsui, a UW Medicine clinician, emphasized the importance of creating drug treatment services that can address multiple drug addictions at once.

So not only are people who experiment with fentanyl/opiates and meth in tandem more likely to suffer adverse consequences of such use, but they're also more likely to drop out of treatment! And, to make matters even worse, statistics on co-occurring meth and fentanyl use are on the rise!

Is there a solution to what appears to be an unsolvable and growing problem?

Drug addiction is a severe crisis for the entire family. It’s a misery-inducing phenomenon for both the addict and his or her loved ones. If you have a family member or loved one who is addicted to more than one drug at once, you might feel utterly hopeless in the prospect of them getting better. And that’s understandable.

Thankfully, proven rehabilitation techniques do exist that can help those who struggle with more than one drug habit.

Narconon’s mission is to provide an effective path for rehabilitation from drug abuse. The goal is to assist society in preventing the spread of addiction. The objective is to help people find a lifetime of freedom from drugs and alcohol. For over half a century, Narconon has worked to help thousands of struggling addicts find life anew.

Narconon offers a unique program to help people overcome addiction, even when they have multiple drug habits. And Narconon is backed by evidence-based research. Not only is Narconon’s tried and true methodology directly responsible for the sober and happy lives of thousands of people, but Narconon has the statistical analysis to back it up.

If you are seeking help for a family member or loved one who is struggling with an addiction to multiple drugs at once, it’s understandable that you would be worried that treatment will not work for them. And yes, someone who struggles with more than one drug habit might require more time in treatment. One of the benefits of the Narconon program is that it is not a definitive, 28-day program that sends recovering addicts on their way after 28 days regardless of their relative progress within the program. Recovering addicts at Narconon take the time that they need to get off and recover from drugs.

As terrifying as it might be for you when you fear for the future of your loved one, nothing will change for the better until they get help. Getting them into treatment is the first step on the road to a better life for them and for the whole family. Make sure they get into treatment as soon as possible.

After working in addiction treatment for several years, Ren now travels the country, studying drug trends and writing about addiction in our society. Ren is focused on using his skill as an author and counselor to promote recovery and effective solutions to the drug crisis. Connect with Ren on LinkedIn.

Texans to Rehab Texans tend to be justifiably proud of their big state and the tough-talking attitudes of Texans. The slogan “Don’t mess with Texas” is a refrain used by Texans to express their pride in their own independence and ruggedness. 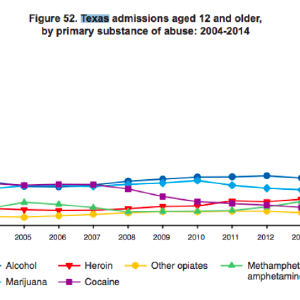